BRICK – Residents who suffer from bright lights shining onto their property from neighbors’ yards should get some relief as the governing body passed the introduction of an ordinance entitled “Light Trespass in Residential Areas” during a recent council meeting.

Council Vice President Art Halloran said the Council’s Land Use Committee has requested the ordinance which includes a prohibition on light trespassing in residential areas and outlines prohibited acts.

Those acts include placing or maintaining spotlights or other types of artificial lighting that provide a continuous concentrated beam of light extending beyond any property lines.

It also prohibits placing or maintaining spotlights or other types of artificial lighting extending beyond the vertical plane of the face of any building or structure that causes a beam of light to be reflected upon any adjoining property or public street.

Motion detector lights that automatically turn off within ten minutes of activation are exempt.

The Police Code Enforcement and the Zoning Department will have the ability to enforce this code, Halloran said. Existing lights are not grandfathered in, he added.

During public comment, long-time township resident Maureen Molz of Drum Point Road brought visual aids that showed where the light pollution was coming from in her area.

“I’m one of numerous neighbors that have been suffering with and dealing with the excessive lights that have started to populate the neighborhoods of Brick,” she said.

Molz said that glare is a second component to light pollution, resulting in the inability to see beyond the lights.

“If I’m outside on my deck, I’m blinded by the light and can’t see the night sky,” she said. “I’ve lived in Brick for over 30 years and I’ve never seen anything like this before.”

Molz said she retired in 2019 and was looking forward to a happy retirement, but finds herself stressed and unable to sleep because the artificial light comes through her room-darkening shades.

“In short, I don’t have peaceful enjoyment of my property,” she said. “I am really thrilled that the town council is looking at adopting this ordinance,” Molz said.

Teresa said that they and other neighbors have been suffering for two years from light trespass and glare.

She described a neighboring home that has a bright lightbulb on each of the 15 outdoor columns surrounding the property.

“The light that is emitted is trespassing on properties that surround it, and across the lagoon – even to houses that are 90 feet away,” she said.

The couple has to keep shades drawn at night, which means they can’t open their windows and have fresh air. “This is a compromise that we don’t think we should have to make,” she said.

Some of the residents have approached the offending neighbor, but the neighbor doesn’t care, Demetriou said.

“We need your help. We think it’s time for a lighting ordinance to help us and our neighbors get back to simply enjoying our homes – inside and out – whenever we choose,” she said.

The New Jersey Light Pollution Study Commission submitted a report to the governor and legislature in April 1996 and specifically noted that light trespass, including lights that illuminate a neighboring property, may be viewed as an invasion of privacy, deteriorate the natural nighttime environment, impact driving, reduce the ability to observe the starry night sky and that obtrusive lighting conditions may be avoided by the adoption of local ordinances. 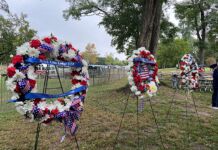